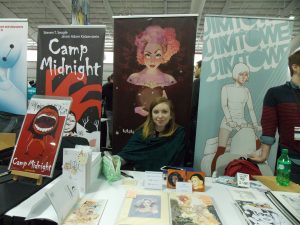 Meet the Guests is where we showcase the creators that you may see at your local comic convention. This time around we feature artist Gemini H. Gemini is a French artist based in Seoul South Korea. We met Gemini at the New York Comic Con, which was her first American Comic Convention. Here are her thoughts on that experience. 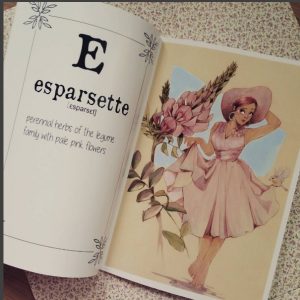 Actually I started to take part in conventions and illustration events only this year, so I don’t have one work I’m famous for except the small art book I made for NYCC which is a french
ABC and for the style I’m developing. My style is what I call Nostalgic art, its not pinup art, not burlesque art, its a style that give some nostalgic feelings of the old good times to the stories I’m trying to tell.

If it’s only an autograph I don’t charge anything.

I don’t charge anything for pictures….that would be quite a miracle that someone would ask me to take a picture. 😉 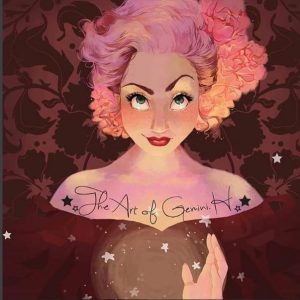 When someone buys one of my books I usually do a quick sketch inside but that’s all.

If someone wants a private sketch or a commissioned artwork, they can contact me early enough before the con and pick it up during the event.

I don’t do drawing on sketch covers.

I always have some books on my tables, then the rest of the available items depends on the  event policy and the size of the booth, but usually some prints, some cards, some originals and in the future i will make more small items such as stickers, postcards, stationary, pins, original paintings, some hand painting accessories…

I don’t have any particular weird thing, but just a moment that surprised me and made me smile, some man full of tattoos of skulls and horror/death related tattoos, with a long beard asking for a princess drawing in one of my books…..for him

Also, I’m not sure if the story I want to share is particularly funny, but after NYCC I feel I need to tell it maybe to give some good vibes to aspiring artists. My first con was in France, I made some prints and was selling them, but that was my first event like this and I didn’t bring anything to cover my stuff at night. The next morning some really arrogant famous french publisher came to my booth but was clearly not interested even just to say hi and know how things where going for me. I was in the independent artist alley, my booth was pink, i was wearing pinup style make up, dress, high heels, flowers in my hair, nothing special just me and my drawings. However, they decided I didn’t have my place in a comic con and loudly express their feelings right in front of me without looking at me to a man in his 60s. The other man was wearing a suit and suddenly he looked at me and rushed to shake my hand, he said really kind words and that the previous night he walked around the alley and saw my books and prints and adored it, because it was different and usually in comic cons there are mostly things for boys but little girls don’t have anything special to read. Then he bought 3 of my books or so for his grand daughters, and explained to me that he would come back later. But then he told me I could contact him if I had some problems because…he was the CEO of the comic con! Big laugh for me, and 10min later another man came, the co ceo of the event who bought books and prints. It’s been a week since I’ve been back from NYCC, my first big comic con, my first American con and  and I met people from an extremely famous comic publishing company who didn’t ignore me or said I didn’t have my place there, that was the complete opposite from my first convention experience. So now I’m thinking about how far I’ve been, and these tiny publishers (compared to the people who shook my hand in NYC) and their comments, and this story quite makes me laugh.

Who were you excited to meet at a con? (Either as an attendee or a guest.)

Definitely my NYCC booth neighbors. Having a Marvel artist (Jim Towe), a New Yorker cartoonist (Jason Adam Katzenstein) and the creator of Big Hero 6 (Steven T. Seagle) on your side, that give you lots of ambition and determination.

Any Con Pet Peeves? Such as someone bringing you 100 comics to sign?

I’m not famous so nobody can come with a luggage full of my books. 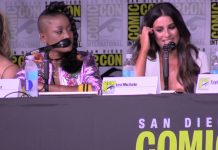 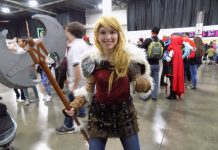 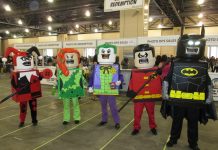 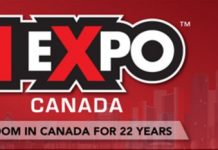